Mercury, my next Graha(planet), though not well situated in the heavens right now, happens to be in exaltation for the next 5-6 hours in the Navamsa (the 9th divisional chart.)
So I am squeezing in a start for Mercury though as I write it’s already 10:30 PM. I know I won’t be able to draw him out, but there is always time for a blog entry!
Mercury
“Wearing yellow garlands and clothes, brilliant like a Karnika flower (a brilliant white flower),
handling a sword, shield and mace on a lion and blessing is Mercury.” 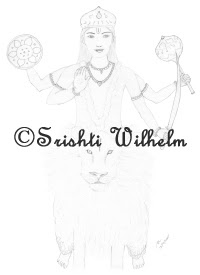 Yellow is the color of nobility, thus Mercury’s yellow garlands and clothes reveal that he behaves in a noble manner. Mercury is the “Young Sovereign.” His garland represents that he is worthy to be honored for his many abilities. His brilliance is the result of his vibrant pursuit and enthusiastic personality.
Mercury’s sword reveals his honor, especially in the times of conflict. His shield represents his ability to protect himself from dangers, which Mercury does through the effective management of problems and through avoiding potential problems. His mace represents his ability to destroy when necessary. His fourth hand blesses with productivity and the successful realization of one’s projects.
Mercury rides a lion, which symbolizes his mastery of the material realm and his ability to be a successful mover and shaker in the world. Mercury’s mastery is revealed by Mercury’s Mahapurusha Yoga: Bhadra Yoga (formed by Mercury being in an angle in own or exaltation Rasi), which is said to create a great leader and an individual of accomplishment.
–excerpt from my husband’s Graha Sutras.
February 14, 2009/0 Comments/by Srishti Wilhelm
http://srishtiart.net/wp-content/uploads/Logo-green2-1-300x77.png 0 0 Srishti Wilhelm http://srishtiart.net/wp-content/uploads/Logo-green2-1-300x77.png Srishti Wilhelm2009-02-14 06:30:002013-12-25 21:24:31Mercury – WIP

Want to join the discussion?
Feel free to contribute!

This site uses cookies. By continuing to browse the site, you are agreeing to our use of cookies.

We may request cookies to be set on your device. We use cookies to let us know when you visit our websites, how you interact with us, to enrich your user experience, and to customize your relationship with our website.

Click on the different category headings to find out more. You can also change some of your preferences. Note that blocking some types of cookies may impact your experience on our websites and the services we are able to offer.

These cookies are strictly necessary to provide you with services available through our website and to use some of its features.

Because these cookies are strictly necessary to deliver the website, refuseing them will have impact how our site functions. You always can block or delete cookies by changing your browser settings and force blocking all cookies on this website. But this will always prompt you to accept/refuse cookies when revisiting our site.

We fully respect if you want to refuse cookies but to avoid asking you again and again kindly allow us to store a cookie for that. You are free to opt out any time or opt in for other cookies to get a better experience. If you refuse cookies we will remove all set cookies in our domain.

We provide you with a list of stored cookies on your computer in our domain so you can check what we stored. Due to security reasons we are not able to show or modify cookies from other domains. You can check these in your browser security settings.

These cookies collect information that is used either in aggregate form to help us understand how our website is being used or how effective our marketing campaigns are, or to help us customize our website and application for you in order to enhance your experience.

If you do not want that we track your visit to our site you can disable tracking in your browser here:

We also use different external services like Google Webfonts, Google Maps, and external Video providers. Since these providers may collect personal data like your IP address we allow you to block them here. Please be aware that this might heavily reduce the functionality and appearance of our site. Changes will take effect once you reload the page.

The following cookies are also needed - You can choose if you want to allow them: